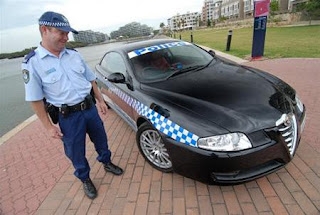 OK, so this is quite amusing. It appears that some Ozzie cops had their cyber-sting backfire on them. After taking over the hacking forum root-y0u.org by basically busting an administrator of the site at their home address and posting a "warning" on their sites front page...

"This underground form has been monitored by law enforcement - every post, private message and all registration information has been captured. All member IP addresses and have been logged and identification processes are now underway.

The creation and distribution of malware, denial of service attacks and accessing stolen information are serious crimes.

Every movement on this forum has been tracked and where there is information to suggest a person has committed a criminal act, referrals will be forwarded to the relevant authority in each jurisdiction. There have already been a number of arrests as a result of current investigations. This message should serve as a warning not to engage in criminal activity."

... it seems that a sympathetic soul has in turned hacked the Australian federal police system.

Its odd that the Ozzie police would have decided to alert patrons of the r00t-y0u.org site that they were now being monitored - instead of running with it for longer and perhaps building a cases against the sites users/subscribers. Oh well lessons learned I guess... the painful way.

It's also odd that they didn't take down the affiliated Black Hacking site at the same time? perhaps they did and they're just watching it now ;-)
Posted by Gunter Ollmann at 10:22 AM