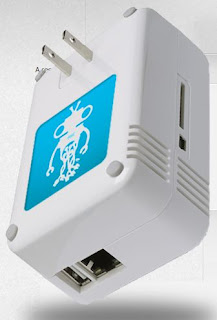 In what sometimes feels like a past life after a heavy day dealing with botnets, I remember fondly many of the covert and physical penetration tests I've worked on or had teams engaged in.

Depending upon the goals of the penetration test, things like installing physical keyloggers on the receptionists computer (doing this surreptitiously while engaged in conversation with the receptionist - hands dangling down the back of the computer...) in order to capture emails and physical door entry codes, dropping a little wireless Compaq/HP iPaq in the plant-pot for a day of wireless sniffing etc., dropping "malware" infected USB keys in the office car park in the morning (waiting for the "finders" to check them out on their office computer by lunchtime) and pretending to be official fire extinguisher inspectors and getting access (and a little alone-time) in their server farm.

Anyhow, today I spotted an interesting gadget that would have been pretty helpful on many of these physical engagements - The PlugBot. It's a wireless PC inside what looks like a plug adapter.

If you're not a penetration tester - perhaps you should read about it anyway. Something to "keep an eye on" within your own organization then.
Posted by Gunter Ollmann at 7:16 AM No comments:

You've probably heard about the protests going on in London concerning the proposed uptick in University fees and the way in which some of the actions (from both sides) have gotten out of hand.

We'll it appears that Google Maps has/is been/being used for command and control of the various protesting actions by some - tracking where the police/brocades/ambulances are etc.

It's an interesting use of the mapping technology.

Student protesters use Google Maps to outwit police on the Metro.co.uk 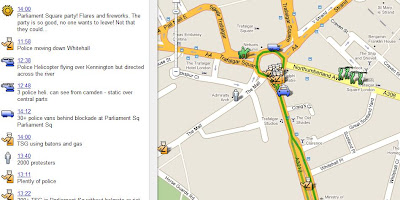 Posted by Gunter Ollmann at 6:45 AM No comments: 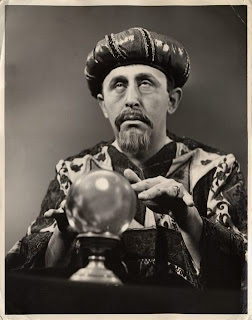 OK, so it's that time of the year again and all the security folks are out making predictions. And, as usual, I have a number of inbound calls for me to pump out the same. Not necessarily "the same" predictions though - since why would marketing and PR teams want to pimp "the same" predictions as everyone else... that'll never get mentioned in the press... ideally a few predictions about how the world will come to an end and preferably in a way that no one has though of before. You know the sort of prediction I mean - "By the end of 2011, cyber criminals will have full control of the electronic systems that control sewer pipes in the US and will be extorting cities for millions of dollars - or else they flood the city and cause massive deaths from typhoid and plague."

Cynicism in the run up to Christmas? Bah-humbug :-)

Anyway, despite all that, "predictions" can be pretty useful - but only if they're (mostly) correct and can be actionable. So, with that in mind, I've posted some "expectations" (rather than predictions) for 2011. I think it's important to understand the trends behind certain predictions. A prediction that comes from no where, with no context, and with no qualification is about as helpful as a TSA officer.

Here are the 2011 predictions (aka expectations) I posted on the Damballa blog:

Posted by Gunter Ollmann at 6:37 AM No comments: 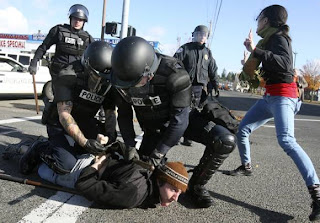 You'll find some comments on the other blog, but I wanted to add some more thoughts here - based upon some thoughts shared by others on the topic.

I guess the issue lying at the heart of the question is whether, by implementing a blocking (or filtering) policy based upon the findings/classification of a dynamic reputation system, you'd be gaining better protection than having implemented a stand alone IPS.

To issues come in to play in the the decision - How "complete" is the dynamic reputation system? and How "reliable" is the IPS?

As I said in the original posting - advanced dynamic reputation systems have been coming along in leaps and bounds. We're not talking about some static blacklist here and neither are we limiting things to classic IP reputation systems that deal with one threat category at a time. Instead we're talking about systems that take as inputs dozens of vetted threat detection and classification lists, realtime feeds of streaming DNS/Domain/Netflow/Registration/SpamTrap/Sinkhole/etc. data and advanced machine learning algorithms.

From experience (and empirical evidence), blocking the things that a dynamic reputation system says is bad or very suspicious at the network perimeter appears to out perform IPS - if the count of victim machines is anything to go by.

One of the key failings of IPS is that its reputation is better than its performance. What I mean by that is an IPS is limited to its signatures/algorithms for detecing know threat profiles and exploit techniques. These are not all encompasing - and you'll normally only fine the first "in-the-wild" exploit for a vulnerability covered (or exploits that get used by popular commercial hacking tools and IPS testing agencies) - rather than all the obfuscation and evasion techniques. You may remember the blog I did a little while about the commercial exploit testing services used by the badguys - such as Virtest.com.

So, here's my thinking. It's better to block known bad and provable dangerous/suspicious servers (independent or restricted to a particular protocol - depending upon your tolerance for pain) than on a hope that your IPS is going to stop some (hopefully) past-seen permutation of a particular exploit being served by the attacking server.

Some may argue that you're still at risk of servers that are unkown to a dynamic reputation system. Are you though? Think of it this way. You have a dynamic reputation system that is taking live datafeeds etc (as described above) for the entire Internet. If a server (or service) has never been seen and doesn't have a reputational score - then it's already suspicious and could probably be blocked for the timebeing.

Defense in depth is still a good option though!
Posted by Gunter Ollmann at 4:11 PM No comments: