So, it looks like the Mozilla folks have taken the initiative to block a couple of (pretty much) now default Microsoft Windows plug-ins that open up a few additional vectors for the bad guys to conduct drive-by-download attacks. 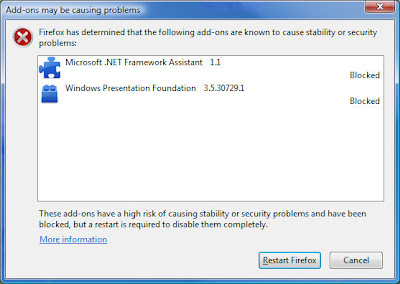 The two Firefox add-in's are the Microsoft .NET Framework Assistant and the Windows Presentation Foundation (as depicted in the screenshot of my system this evening).

Brian Krebs over at the Washington Post has a blog entry up (Mozilla Disables Microsoft's Insecure Firefox Add-on) covering more of the background on the topic and what led up to this latest Firefox response.

So, thumbs up to the Firefox team for taking the initiative here and working to protect their users. Keep up the good work.

Oh, and thanks also for the work with the new Plugin Check page. Its a great start to something thats been missing for quite some time (for mainstream users). There's still a lot of work to be done in figuring out which versions are installed (if the my screen shot below is anything to go by) and helping to manage the update process. It's something I've been calling for for quite some time now (see the whitepaper - Understanding the Web Browser Threat) - but this is real progress.

Posted by Gunter Ollmann at 7:32 PM No comments: 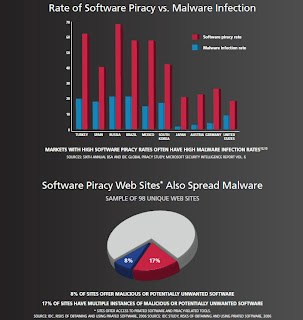 This last week has seen quite a bit of public discussion concerning the effect of software piracy on compromise rates, based upon Monday's release of a report titled "Software Piracy on the Internet: A Threat To Your Security"by the Business Software Alliance (BSA) - pages 6-12 are definitely worth a read (the rest is a little too self-serving of the BSA).

I don't believe the report actually holds any surprises for most security professionals, but it's always handy to have some independent (and current) validation.

I can remember back to the old 1980's BBS days where piracy was just as rampant with online games and even the base BBS software being backdoored by folks looking to make a quick buck through their leeched warez. The only thing that has changed has been the channels for distribution.

In the past I've conducted a number of studies related to pirate distribution channels - looking at both the exploits and malware being embedded in the content. For example, back in 2001-2002 when image file exploits were all the rage (e.g. JPEG/PNG/GIF/etc. file parsing vulnerabilities) I set up an experiment to analyze the content of several popular binary newsgroup channels (ranging from some of the heavily trafficked porn groups through to celebrity and disney image groups) and found that upwards of 5% of the copyrighted images being distributed contained exploit material (one popular vector was for the bad actors behind the attacks to respond to Repost Requests and Fills for missing images of popular collections).

A couple of years ago I repeated part of the experiment - but instead focusing on binary files (mostly games, Windows applications and keygens) and found almost two-thirds of the newsgroup content was backdoored with malware. I'm pretty sure that if I was to run the experiment again today I'd find the malicious file percentage to be higher. And thats just the newsgroup distribution channel. The P2P networks tend to be worse because its so much easier for others (potential victims) to stumble upon a malicious version of the pirated software - largely because it's a more efficient channel for criminals to operate under and they have a greater chance of enticing their victims (i.e. using faster P2P servers, constantly monitoring what's hot in file sharing, exploiting their own reputation systems, using botnets to saturate/influence, etc.).

What does this all mean? Well, it can probably be best summed up as "you get what you pay for" in most instances. While the motivations behind the BSA releasing this specific report are pretty obvious, so too is the fact that software piracy has, and always will be, a viable vector for criminals to make money both directly and indirectly through their pirated warez - i.e. selling "discounted" software, and through the use of the botnet infected hosts of their victims.

Dancho Danchev over at ZDNet has an interesting view on the problem by taking a look at the patching perspective - which I wholeheartedly agree with too. I covered the angle of patching (specifically Web browsers) in a whitepaper mid-2008 - Understanding the Web Browser Threat - that still applies today.
Posted by Gunter Ollmann at 6:24 AM No comments:

Finally, today saw the public release of my latest technical whitepaper. This new whitepaper focuses on the business and techniques of generating unlimited quantities of undetected malware.

Cybercriminals have built serial variant production systems for several years and have been increasingly successful in using their spawned malware to bypass antivirus detection systems. The concept is simple - produce and release new malware faster than the antivirus companies can release new signatures to detect them. This idea lies at the very heart of the explosion (and exponential growth) in the numbers of new malware being discovered.

My latest whitepaper explains the components used by cybercriminals to construct "undetectable" malware - breaking down the tools they rely upon and the production tactics they use.

The papers goal is to enlighten those responsible for maintaining enterprise antivirus defenses about the tools cybercriminals and botnet masters have at their disposal - and help them better understand the root causes for the exponential growth in malware on the Internet.