Like the cycling of the moon, the security industry also exhibits periods of waxing and waning on particular issues.

At the moment it looks like were entering the Waxing Gibbous stage for anti-FUD (Fear, Uncertainty and Despair) movement. In recent weeks the proliferation of calls to deal with FUD within the security industry has picked up. Depending upon the particular sector, you'll encounter discussions about overcoming the fears associated with shifting data in to the cloud, why "advanced" threats aren't so important if the bulk of attacks don't need to be, etc.

As you'd expect, there are quite a few security folks who make their dime by being vocal about a particular topic, and it's that time of the cycle that the anti-FUD speeches get dusted off and replayed. That's not to say that the anti-FUD folks are unique. There's an biannual waxing and waning to the Full Disclosure movement too, along with annual revisits to the topic of Vulnerability Purchasing Programs, etc.

The anti-FUD movement consequently promotes their own kind of "FUD" - speculating that the world would be a better place if FUD ceased to exist in the security world, and that organizations would be better able to prepare their defenses without the distractions of the next biggest threat.

Some aspects of the anti-FUD cause I might just agree with, but in general I'm less inclined to to follow much of rhetoric from die-hard security officinardos. Why? Well, for the most part, many of their statements are naive in that they obviously fail to understand the world they live in. Listening to them you'd think this is an IT security problem - but in reality "FUD" is a critical element of the sales cycle - regardless of whether you're selling car tires or anti-zit cream.

Every second car advertisement on TV extols the virtue of their safety features, even drunk-driving and "wear your seat-belt" literature distributed state authorities cover the gruesome consequences of not following the rules and taking appropriate actions. FUD gains the attention of the viewer/reader, educates them in some capacity and makes them think more about the consequences of their actions (or inaction's).

FUD is everywhere - just watch the ads covering Zit cream and Tampons on TV, and you'll get the idea. FUD is a critical element of the sales cycle by eliciting a reaction to the message (generally - aiming for a buying reaction).

Folks that jump on their anti-FUD high horses, from my own experience, tend to struggle with commercial sales because they fail to understand what FUD is all about - education, compulsion and sales.

Having said all that, lets not go to the other extreme though. In order to make their FUD more compelling and elicit a greater compulsion for listeners, some sales folks will stretch the truth in to the realm of fiction. These folks need to be quickly reigned-in by the company paying their paycheck. To do otherwise would inevitably result in pissed off customers and a loss of business.

Final thoughts? The security industry is no different from any other industry with innovative products aimed at solving the problems of today and the future. FUD is a way of life, get used to it.
Posted by Gunter Ollmann at 7:27 AM No comments:

If so, did you know you can actually see the data encoded on your card?

Over the weekend I stumbled upon a very interesting blog titled "Another Science Experiment" covering the use of finely ground rust dust to see how the data is encoded on to standard credit card magnetic tracks.

I'll let the photo's below do the talking... 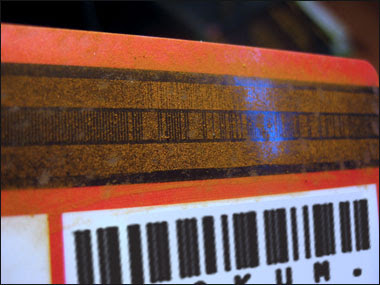 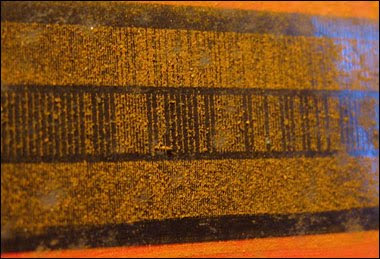 Posted by Gunter Ollmann at 7:00 AM No comments: 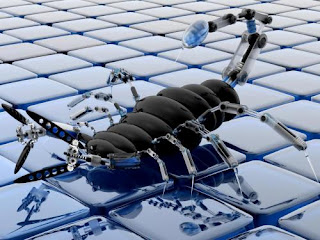 Not all malware is created equal. Of the 50k-80k new and unique malware samples received daily by the mainstream anti-virus companies, there's a lot of scope for variety. Most of the samples are merely serial variants being pumped out as part of a barrage of criminal campaigns, and then there's a sizable handful of custom crafted malware that (for the most part) is generally unsophisticated botherware and spyware, but occasionally you'll uncover a few very crafty and sophisticated malware samples mixed in there.

In a lot of cases, these particularly sophisticated malware samples only manage to get caught up in the wash of general malware samples because of some circuitous and "unlucky" compromise paths - or because they're several months old and the "discoverers" have finished reaping the reward of having investigated them. Most of the really interesting bespoke malware samples rarely come via mainstream discovery and sample sharing systems though - in fact the majority of them rarely go beyond the virtual walls of the organization or government department that were targeted or victimized by them.

Given all the discussions about Advanced Persistent Threats (APT), Advanced Malware and Next Generation Malware (NG Malware), I thought it was about time to disclose some of the techniques being used within the commercial world in the production of such sophisticated malware... hence this blog entry being the first in a series covering "Military Grade Malware".

Military Grade Malware
I use the term "Military Grade Malware" to encompass the following key concepts:
Why are these important? The vast majority of malware circulating around the Internet and infecting both home and corporate systems are clearly designed for criminal purposes. More often than not, they're heavily weighted towards data theft and financial fraud. While the authors of the malware may or may not be criminals themselves (e.g. many of the popular DIY construction kits are sold commercially, by licensed companies, as "Remote Administration" tools) - they are designed to operate on popular operating systems and commodity hardware.

In the past I've used the term "weaponized" to encompass malware that makes use of exploit material as part of its critical operations - but this term only extends so far.

Exploit Weaponization
There are plenty of boutique security consulting organizations out there that offer "weaponization" services. They will typically review and study the latest vulnerability disclosures, develop reliable exploits for use against specific operating systems (e.g. an exploit for a popular Vietnamese instant messaging client running on Microsoft Windows XP SP3 with the Vietnamese language pack installed), and pass the final QA-checked exploit on to their client.

Most of the organizations I've come across that provide this kind of service have strong affiliations with their local government. That said though, a handful of them are more mercenary and will provide their weaponized exploits to other "friendly" governments. I'll point out at this stage though that this is a wholly different arrangement compared to vulnerability research teams working within companies that develop commercial vulnerability scanning and exploitation tools.

The provisioning of (reliable) weaponized exploits will generally be governed by formal legal contracts. It's not easy work though. Many people see the plethora of public vulnerability disclosures and hear about the odd zero-day exploit doing the rounds, but the development of reliable exploits that meet the contractual demands of the client is not a simple task. A company that can deliver a half-dozen ruggedly reliable weaponized exploits each year is doing very well - and will be compensated accordingly.

Malware Weaponization
The weaponization of malware in my opinion generally only encompasses the binding of a "standard" malware component to a particularly good/reliable/weaponized exploit.

For example, a client may have a preferred Remote Access Trojan (RAT). This RAT is consequently bound to the latest weaponized exploit - i.e. the RAT is merely the payload of the successful exploitation.

In another example, a versatile malware agent may support a library of exploits that it can use to worm and propagate around a targeted network. In this case, the weaponized exploit is constructed to be compatible with the malware agent and is added as an "update".

Both examples would fulfill the generic term "weaponized malware", but there is a difference between this type of malware and what I'd tend to term "Military Grade" malware, since military grade malware may or may not actually make use of weaponized exploit materials.

What are the features and techniques of military grade malware? I'll begin to cover those details in subsequent blog posts...
Posted by Gunter Ollmann at 7:38 AM No comments:

Trawling around for stolen credentials and identity information - in the form of criminal cast-offs and sales samples - can be an interesting endeavor if you're looking to understand the current state of credential laundering. One growing repository for such information are all of the various paste bin repositories (of which there are dozens of popular sites).

Earlier this week I discussed the topic over on Damballa's blog site in the entry titled: A Treasury of Dumps. The blog provides a few samples of whats available and how the criminals are using them to augment their search for potential sellers.
Posted by Gunter Ollmann at 7:31 AM No comments:

"One bullet, one kill" - isn't that some kind of sniper saying from the movies? If you're a professional botnet operator you're not going to want to loose control of your favorite botnet just because some damned whitehat managed to take down a single command and control (CnC) server.

With that in mind, you're also probably not going to want to build your botnet in a way that its growth is reliant upon a single infection vector or content distribution vehicle. The solution nowadays lies with the strategy of running multiple campaigns against your targets.

To understand botnet building campaigns a little better, I've thrown up a blog on the topic over at the Damballa site - Botnet Building Campaigns.
Posted by Gunter Ollmann at 11:38 AM No comments: