I've been watching with interest this "twitter train" phenomenon. Scam of the week...

In a nutshell, a number of websites have been set up under the guise of "twitter train" whereby low-esteem twitter addicts can potentially add hundreds of new followers. 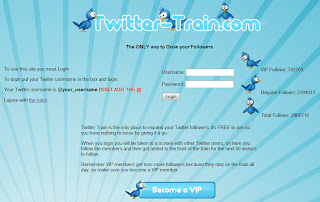 From the website(s):
"Twitter Train is the only place to expand your Twitter followers. Its FREE to join so you have nothing to loose by giving it a go.

When you login you will be taken to a screen with other Twitter users, on here you follow the members and then get added to the front of the train for the next 40 visitors to follow.

Remember VIP members get tons more followers because they stay on the train all day, so make sure you become a VIP member."

Whoah... so to use this follower-building service I have to give them my Twitter authentication details? Oh, and then there's:

It's a kind of hybrid pyramid scheme meets password stealer that'll spew out spamvertizing? Are they crazy? Perhaps not. Looking at a couple of different sites (www.twittertrain.info and www.twitter-train.com -- since www.twittertrain.com has been shutdown) you'll see numbers like 3,373,486 and 2,966,814 respectively being depicted as "Total Follows" with close to a combined 1,700,000 VIP follows (i.e. paid-for accounts). There's no guarantee that these numbers are anything real (and I suspect that they aren't) but thats a huge number of potentially stolen/hijacked accounts.

For those suckers (and soon to be victims?) seeking to build up their social cred by dramatically adding followers, do you really know what you're getting in to? I hope you don't use the same password on sites beyond Twitter!

Don't say you weren't warned. And don't be suprised if you're un-followed as soon as your account starts spewing tweet-spam. Better change your Twitter password before twitter-train does it for you ;-?
Posted by Gunter Ollmann at 6:19 PM